Many cultures have developed complex, spheroidal polyhedra for use in woven bowls, hats and even structures. However, the Greeks were first to record mathematical models of geodesic forms - they created a plethora of regular polyhedra: tetrahedrons, cubes, icosohedrons, dodecahedrons, etc. It was the Romans who first used geometric framing to build concrete domes, introducing the dome as a common architectural element which has survived in modern forms today.

In the 1920's, a German scientist/engineer, Walter Bauersfeld, created the first metal-reinforced, concrete geodesic dome. It was designed to house the first planetarium, created by Zeiss Optical Works in Jena, Germany.

In the 1940's Buckminster Fuller adopted the Greek's icosohedron to produce his Dymaxion or Geodesic Dome for use in architectural structures. Using his icosohedral dome as the basis for a cartographic projection, Fuller became the only person to have been awarded a patent for a map-making process (today, we might call it a texture-mapping algorithm...).

Recent discoveries of complex, but highly stable, polyhedral molecules have been called Buckminster-Fullerines and Bucky-balls in his honor.

While Fuller's work on Geodesic Domes produced quite a bit of excitement among many young engineers -- particularly during the '60s Earth movement -- the geodesic dome fell far short of the expectations that many had placed on it: the economical solution to efficient homebuilding.

There are several reasons for this shortfall:

Having said that, there are many beautiful dome homes built around the world, and a large, enthusiastic crowd of dome supporters. With the growth of the Internet, a recent resurgence in dome interest has taken hold -- and many people are beginning to rediscover domes as a fun, structurally secure and ecologically-minded form for homes.

I have been interested in geodesic domes since the early 70's, and began writing software programs for creating dome parts-lists while in high school.

The photo on the right shows a 25 foot diameter dome I convinced the school to sponsor - I calculated the number and length of studs, created a jig in shop for pressing and drilling the ends, and on the day that we assembled it -- lo and behold, it actually worked!

During the process of completing that project, it became quickly obvious that icosohedral domes just weren't the optimal shape for most architectural applications. So I started experimenting with dodecahedral-based domes and other geometries.

During my freshman year (1975) at Cal Poly (an architectural school in central California) I entered the annual Poly Royal architectural contest. These were the parameters:

Design and build a temporary structure that could be carried into Poly Canyon (behind the campus), assemble it, spend the weekend in it and take it back down with low environmental impact. It had to be stable/warm/dry enough to house all the people who carried it up there.

The photo on the right is of my group taking our project down after having won 1st place in the state-wide contest. I had used a pad of paper to come up with the polyhedral shape (Rhombicosidodecahedron), and a hand-held HP calculator to determine panel sizes.

My design was cited for several reasons:

This dome turned out to have fairly unique, and useful, properties: all the dome panels were identical squares, equilateral triangles and regular pentagons. I had segmented the pentagons into isosceles triangles to reduce transportation size, increase structural strength and minimize construction waste.

However, even this dome was not perfect for architectural applications. After Cal Poly, I went to work for SysComp/Data General, creating 3D modeling and rendering systems. The photo on the right was shot directly off of a Tektronix monitor (c. 1982), using another dome generating utility I wrote.

Soon afterwards, it occurred to me to take another approach to doing architectural domes - why make them geodesic, at all? I had just completed a program that triangulated 3D contour models, and decided to apply that to spherical shapes.

The domes below use the Stratodesic(tm) algorithm I came up with. The key feature to this dome is that you can easily deform the spherical shape into ellipsoids and other spheroidal shapes without compromising structural integrity. A secondary feature is that it is made up of a series of horizontal slices and a number of vertical planes.

This makes it ideal for architectural applications, in that you can change its proportions and cut the dome horizontally at just about any spot and still maintain its structural integrity -- plus beam/stud sizes are regular; and door/window jams can line up -- unlike that in geodesic domes. This supports architectural applications that are energy efficient, structurally sound and water-tight.

A dome is any object with a shell-like spheroid shape. Typically, domes are truncated, so that they can sit on a surface, such as the ground.

Geodesic domes tend to form Great Circles that split the dome into hemispheres, with few (if any) parallel planes -- making it difficult to use conventional framing methods without degrading structural integrity. Since stratodesic domes are axially symmetrical, they form numerous parallel planes -- ideal for foundations, beams, joists and headers.

While geodesic domes are the best choice for many non-architectural applications, the optimal architectural choice will typically be Stratodesic(tm).

If you are interested in 3D rendering, check out VR World for info and demos on VRML Modeling.

Virtual Reality Modeling Language is the Internet standard for modeling, rendering and navigating through 3D space. Whereas HTML provides a 2D standard for rending text, images and links, VRML provides a real-time mechanism for manipulating 3D models and providing web links in a 3D context.

If you have a VRML browser installed, give my VRML Dome Generator a try. 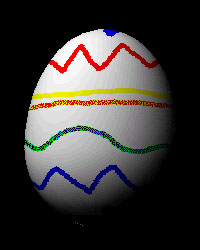 The above examples are all stratodesic domes, and were generated via VRML using a short PERL script.

The Easter Egg, a texture-mapped version of the egg dome, was rendered using Chaco's VRML browser.

The Red Dome was generated using my VRML Dome Generator.

The name Stratodesic(tm) is a trademark of Robert M. Free
For more information on this web page, email domes@graphcomp.com.